Horrorfest has begun, and unfortunately due to RL and lots of computer issues, I was about 4 days late in getting my items out, which is the latest I have EVER been for an event. Let's hope it never happens again! But that aside, I have new foot candy and a corset for you!

First up, the Vivian corset. This corset may look familiar to those of you who have been long time Dilly Dolls shoppers and fans. It has been recycled from my old Heartbreaker Lolita outfit that I released back in January of 2009. It has arisen from the ashes of system clothing, and re-emerged as mesh. The corset even comes with the matching gloves, but at this time, I do not have all of the other parts with it, including the skirts, collar and stockings. However, I may do another release with the other parts, at a later date. For now, it's just the corset and gloves. But also, just for Horrorfest, I have done a simple little jack o' lantern face to dress it up a bit. There are 12 colors, as usual, and they come in standard sizing. Next up, we have some two-toned ombre boots in two styles! The standard boot, and the ankle boot. Both sets of boots are rigged mesh, and come in 10 colors. 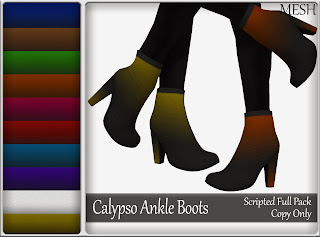 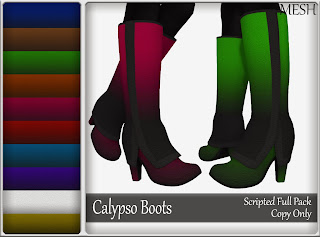 The corset & gloves, and the boots will all be available soon at the main store, in my standard color pallets. For now, these are all exclusive to Horrorfest, so you gotta head over there to pick them up! Please try the demo first though!

I totally spaced when the Twisted hunt started, so I don't remember if I sent any notices or not. I know I forgot to do a blog post, sorry about that. RL has been handing my behind to me for the past few months, and it has not been easy on me.

That aside, the Twisted hunt has ended, and I am releasing the full pack of the Ringmaster boots, in male and female versions! 24 colors total, in two packs. Single colors will be available on the MP (if I can ever get it to cooperate with me), but until then, only the packs are available at the main store. The boots and buttons can be textured separately via the included HUD. 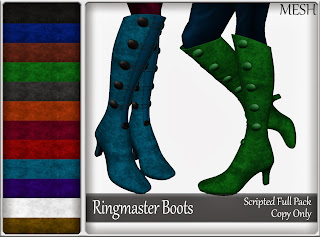 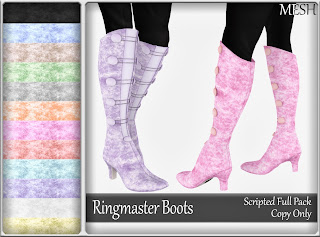 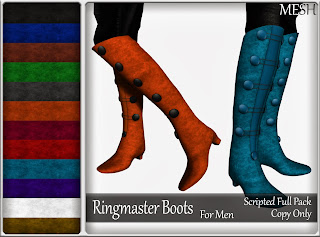 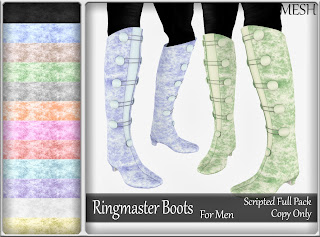 Also, I can't ever have enough pants...and I LOVE yoga pants, so I made some for you! Check em out! 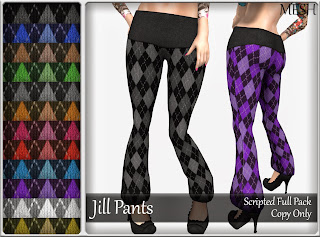 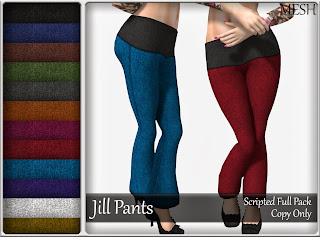 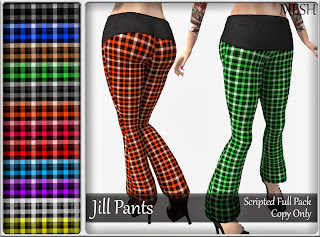 Lastly....I think my gacha supply is long overdue for replenishment lol. Got some new doll keys for ya! Both interactive and decorative versions are available. Transfer only. Enjoy! 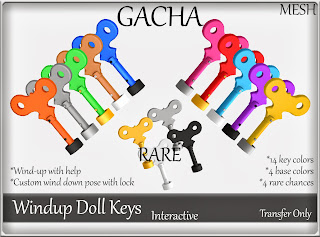 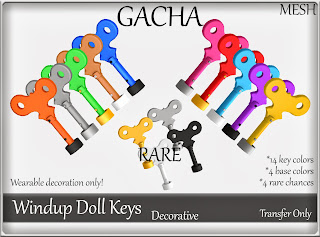